Credit where credit is due - last night BBC4 aired the first of a series of three programmes called 'British Masters' about British painters from 1910 to 1975, presented by art historian James Fox.

I expected the usual pseudo-intellectual clap-trap served up ad-nauseam by our flagship broadcaster, but what a refreshing change; James Fox showed work that involved composition and design, superb brushwork, with attention to tone and colour, painted by superb technicians of the profession, including Walter Sickert, Wyndham Lewis, David Bomberg, Christopher Nevinson, Paul Nash and Stanley Spencer. The programme showed the emotional power that the work of these artists projected to the viewer.

Having read some of my rants on modern 'art', you might be surprised at my comments about these 'modern' artists, especially Bomberg and Lewis, but whilst not being what I would necessarily want on my walls, I can SEE the extraordinary thought and skill involved in creating these works.  My objection is the self-congratulatory thoughtless garbage masquerading as art, rammed down our throats by the media (especially the BBC) and further validated by deluded art critics who know sod all about creating works of art, spouting their unintelligible verbal diarrhoea about such pieces (a word I detest, like 'installation' and 'contemporary', almost invariably meaning crap).

I found this quote in one of my favourite art books, Harley Brown's Eternal Truths for Every Artist:


Just maybe God will come to visit me; along with him will come one of his favorite angels, Jackson Pollock. God will then give me a swap on the back of my bald head: '"What's the matter with you?" he demands. "Here I am, sending subtle, deep messages to earth by way of my artist laureate, St.Jackson.  And you, you keep muddying the water with your superficial nonsense about, 'who does Rothko think he's kidding' and, 'my kid brother can do that blindfolded.'  You got a few centuries of pergatory waiting for you, mister.  You're holding back progress with your not very clever nonsense.  Now, get with the times; I'll be keeping a keen eye on you!"
St.Jackson blindsides me with a left hook, "Smarten up, Brown; I've been the butt of your snideness for too long: Mark, Pablo and I have a special interest in you.  We're going to email you a list of New York art critics just to get you up to speed.  We're counting on you to get the message right this time."
If this does happen, I will take out a full page in the New York Times, detailing the error of my ways; that all of humanity had better smarten up and see the light.  But until then, you can count on me to keep delivering sharp kicks to the rear end of much in Modern Art.
Bravo!  Harley Brown is a fabulously gifted American artist, infinitely more qualified to speak on the subject than I am, so how about the rest of you professional artists out there?  Stop hiding behind your canvases and speak out about the drivel in modern art that gives us all a bad name!
I'm embarrassed to tell people what I do for a living and always feel obliged to quickly qualify 'artist' by saying what and how I paint.  Sadly, both I, Emin, Rothko, Pollock, Hirst, et al, are all classed under the same category.  Let's come up with a term for the nerks who try to pull the wool over our eyes, and in many quarters succeed, sadly.  Any suggestions ?  Start the ball rolling and leave a comment below.
Posted by Peter Barker at Tuesday, July 12, 2011 4 comments:

'The World's Most Expensive Paintings'

I tuned in to BBC1's 'The World's Most Expensive Paintings' last night, to be confronted with Rothko's 'White Center' work at number 10, which sold for $72,840,000. That is 72.84 million dollars, about 45 million pounds sterling - more than enough for a new cancer hospital I should imagine. 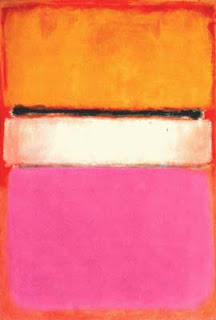 This 'masterpiece' as you can see consists of a band of orange paint, a band of black, a band of white in the middle (hence the brilliantly cunning title) and a band of pink on a red ground.

Then we had the usual burk of an art dealer pontificating about the genius of the 'work'. You can see more examples of Rothko's genius at


http://www.europic-art.com/Rothko.html?gclid=CLunwszJ96kCFUoc4QodWQs0Xw
unless, that is, you've got something better to do, like watch some paint dry (excuse the pun).  If you do have a look, you will see that he really expanded on his brilliant concept of painting horizontal bands of colour, even using different colours on some.
I wonder if Mr Rothko really thought he was a genius and believed the hype heaped upon him by prize prats like the art dealer in the film, or was he just taking the mick and couldn't believe that deluded idiots would pay huge sums of money for garbage and so painted loads more to secure his future?

What an arse-about-face world we live in, when when the mere fact that a Russian oligarch will pay ludicrous sums for something painted by a 'named' artist, regardless of its artistic merit, which, in Rothko's case is self-evidently  close to zero.

At least the genius of Rembrandt or Rubens is self-evident, whilst Rothko, Pollock and similar pillocks who think they have talent, are yet again classic nailed-on cases of the King's new clothes, and I wish a few more artists would come out of the woodwork and tell the truth about this garbage foisted on us, especially by the BBC. I will argue to my grave against this crap masquerading as art.  It might be visually pleasing, but it DOES NOT require any skill whatsoever, just an idea.

These are the last two paintings for my one-man-show at the Marine House Gallery at Beer starting next Saturday, 16th July. I shall be at the Gallery to meet and greet all day from 11am till 5.30pm, so I hope to meet some of you. If you do come, please make yourself known to me - I'll be the one with the cape and shades, signing books and bodyparts, surrounded by dozens of fawning women, trying to calm people down, but megastardom has hardly changed me, honestly...................

All 45 paintings can be seen on the Gallery website at http://www.marinehouseatbeer.co.uk/catalog/artist.php?artistid=282&galleryid=22&page=1
Incidentally, for those of you who are on the gallery mailing list and have therefore received an illustrated catalogue, please ignore the colours of the images - due to circumstances beyond my control (what's technically known as a cock-up), almost all the images have a green cast on them.  Rest assured, I don't have cataracts, I don't paint green skies and yukky emerald green grass and trees !  Please ignore these diabolical images and see the Gallery website or this Blog for truer images. 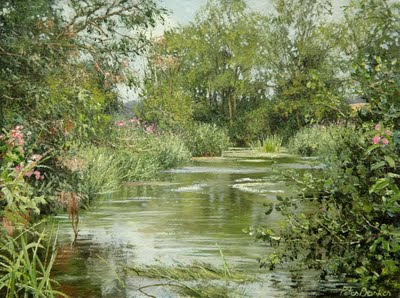 River Meander, Oil 6x8 inches
This is the first painting produced from my wading in my local River Welland the other day. It's a very green, but warm, sunny, summer painting and it was a nice feeling to finally get the last one 'in the bag'.  Now, I have to frame all the paintings ready for delivery to the Gallery. 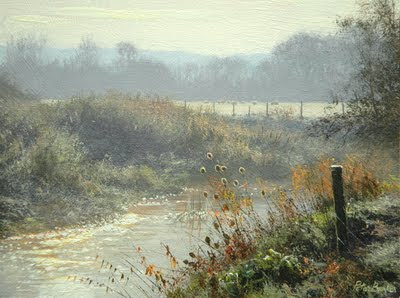 Backlit Teasels, Oil 6x8 inches
Looking straight into the low winter sun on a crisp, frosty day gives a very special sparkle to water, which is particularly tricky to portray with paint.  Titanium White is the painter's hopelessly inadequate lightest light at his or her disposal, so you have to pull a few tricks to create the illusion.  I can't possibly tell you how or I'd have to kill you, obviously.  This contre jour light also gives teasels a gorgeous halo, so I decided to include this in the title.
Posted by Peter Barker at Sunday, July 10, 2011 No comments: 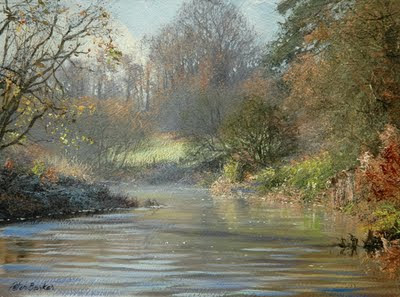 November Sunlight, Oil 6 x 8 inches
This is on my favourite stretch of river, the Welland, near my home. here, it's in its late Autumn garb, with just a few leaves left on the trees and just a hint of mist on the water by the far bank.


Just this morning and yesterday morning I was at the river, in fact IN the river, wading in with my Croc shoes and shorts, drinking in the river (not literally).  I often paint from the bank, but I thought I would try a different angle and nothing quite compares to the water eye view, looking up at the banks, instead of down at the river.  In my mind I was a boy again, wading in the River Cherwell in Banbury, catching Bullheads, Sticklebacks and Minnows in jam-jars.  It really was a joy, wading in that crystal clear water, with hundreds of the very same tiddlers darting in front of my feet in the channels between the bright green flowing Water Crowfoot.  It might be challenging to set up my pochade box and tripod in the river, but I might have a go.  Watch this space........... 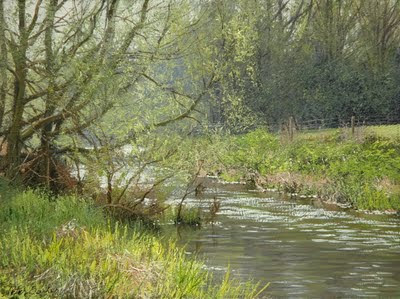 This was a typical April day, with fresh green vegetation growing through the rotted, straw-coloured reeds of the previous year.
Posted by Peter Barker at Friday, July 08, 2011 1 comment:

On Wednesday this week, I gave a still-life demo at Nether Broughton in front of a very appreciative audience.  Here's a photo of the Group: 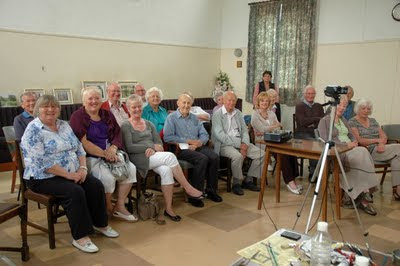 and below is a photo of the unfinished painting.  I wanted to show the group how to tackle different textures; metal, glass, fruit, china and brushes, with particular attention to tones and reflections in quite a high-key painting. As usual, I bit off a little more than I could chew in the allotted time, so I'll have to finish the painting at a later date. 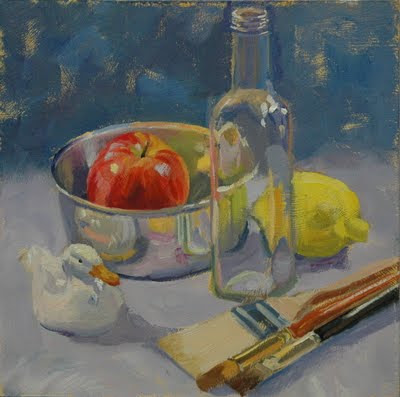