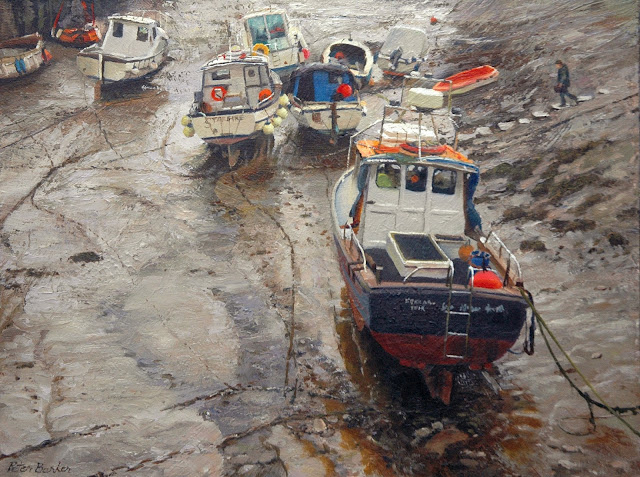 Another offering for inclusion in the RSMA exhibition later in the year.  I don't often paint boats in such flat light, because sunlight throws such beautiful shadows from the vessels, and the shape of them is so defined by the highlights and darks.  But this one seemed to offer a lovely composition from the  footbridge at Porlock Weir. There were no shadows at all, but I loved the rhythm of the boats, taking the eye through the painting from bottom to the top, and the complimentary blues and oranges seemed to glow in the dull light - a phenomenon I've often noticed with scarlet poppies in the half-light as the sun goes down.

I've probably taken the detail a little too far, with lots of fiddly buoys and trims, but I inevitably seem to, because I love those subtle shifts of colour and tone in describing objects...ah well. I painted quite a lot of the slippery mud with my palette knife dragged over the undercolour, almost sculpting the paint in three dimensions. I rarely use the knife, but I do love it for this technique.  I put the figure in, just for a bit of life.
Posted by Peter Barker at Wednesday, June 29, 2016 No comments: Links to this post 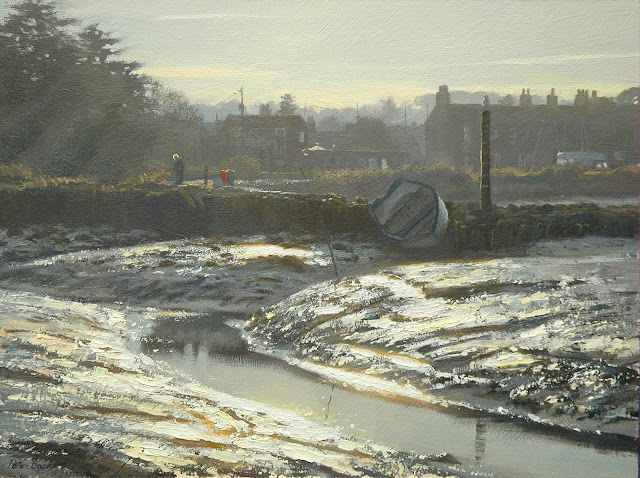 This is just a little painting, and should have been dashed off pretty quickly, but I did a lot of repainting in an effort to get the relative tones right - those progressively lighter tones of the background buildings.  I tend to paint the tones just a bit too dark, and it was quite a struggle in this case to pitch the tones in a high enough key.

This is a painting I shall be putting in to the Royal Society of Marine Artists annual exhibition at the Mall Galleries - one of six. I wasn't quite sure this was a real winning composition, but having done it, maybe I could have done a bigger version - I'll see what the response is here and on Facebook - always a good arbiter of such things!
Posted by Peter Barker at Thursday, June 23, 2016 No comments: Links to this post 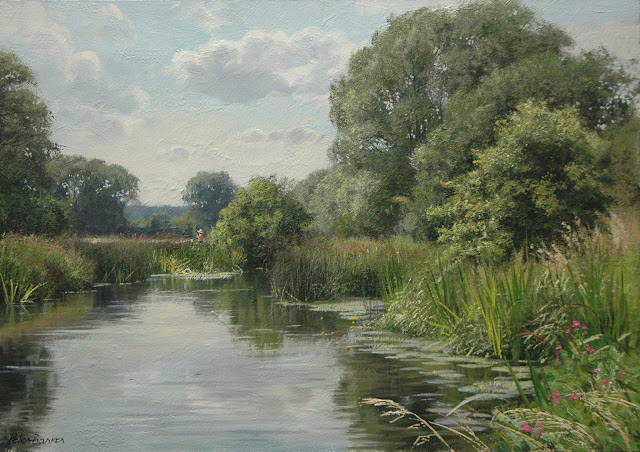 This is another one I had forgotten about, having done it as a demo last year, I think!  It too, was tucked away in a corner of the studio, and I felt it was worth working up into exhibition standard.

On that point, I think it's worth mentioning that some plein air artists tend to leave their work 'as is', and consider working on it in the studio to be taboo. Having run a gallery now for over a year, listening to the public's comments, I have realised that buyers don't give a damn whether a painting was completed on site, or in the studio. All they want when they part with their hard-earned money, is a beautiful piece of art on their walls - that is their ONLY consideration.  Re-working a painting and bringing it to a more 'finished' standard should not, in my eyes, be considered a no-no, and after all, we artists want to sell our work, don't we - there is nothing more heartening than to hear from a gallery that your work has sold.  It is definitely not prostituting your work to use a photo as an aide memoire - the spade-work is done on site after all. Why I'm telling you I don't know - I should be telling artists this!

Having said all that, to work in the open air is much more stimulating than the comfort of a studio, and nothing compares to the drama of having to fight with changing light, and when you do bring home a 'finished' painting, the sense of achievement is exhilarating.
Posted by Peter Barker at Saturday, June 04, 2016 2 comments: Links to this post 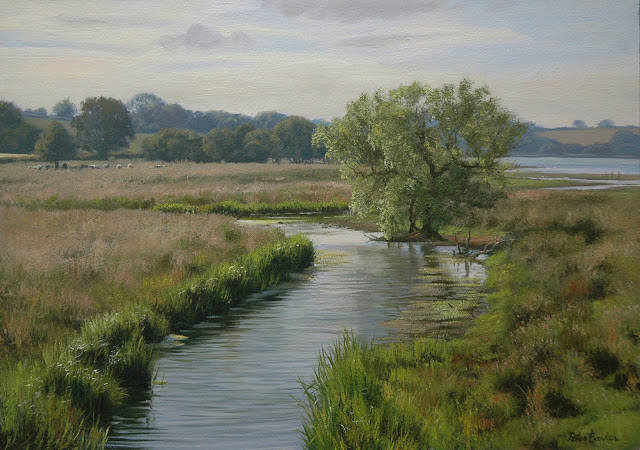 
I actually posted this one last July when I painted it as a demo in the gallery, (did I mention I have a gallery....) but I felt it was a little blue, which is always a problem when painting under artificial, warm lights - your eyes compensate for the yellowy-orange lights and paint cooler, bluer tones.

So, having languished in the studio for nearly a year, I reworked it under daylight lights, and the result is more pleasing, I think.

The view is one of the Eye Brook near the gallery (I did mention I have a gallery, didn't I?), which runs into the beautiful Eyebrook Reservoir...hence the title.
Posted by Peter Barker at Saturday, June 04, 2016 3 comments: Links to this post

Burdock and May Blossom 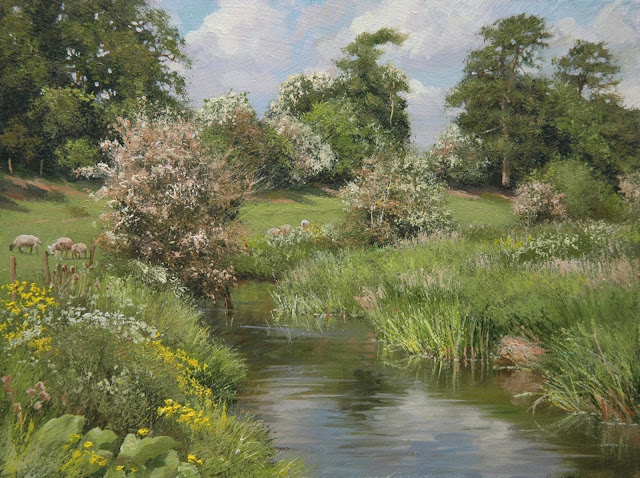 Hawthorns are adorning our hedgerows with their beautiful May blossom at the moment, and here they are by the River Welland, in various states of bloom and wain.

A lot of this little painting was done with my 1" decorator's brush, save for the sheep, the grass they're feeding on, and the water. The big leaves in the left foreground are those of the Burdock, with last year's dried seedheads next to them. Goldfinches love these seeds, and they supply our most beautiful finches with food throughout the Winter. Sometimes there are as many as twenty or so feeding on the heads of one plant whenever I have walked this bank in January.
Posted by Peter Barker at Wednesday, June 01, 2016 2 comments: Links to this post

Quiet Summer Day by the Nene 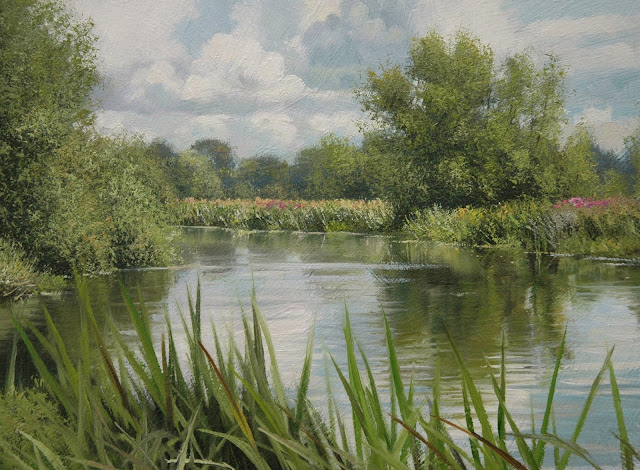 Not a 'shouty' painting this one, with summer clouds stopping sharp, sunlit highlights so that the whole scene is somewhat muted, and none the worse for it.
I placed the horizon relatively high on the picture plane, about in the middle actually, to focus the eye on the water, which was relatively the easiest passage of a painting. The picture would have been a little boring with the reflections mirroring the trees, but the foreground reeds provide a convenient foil to disrupt the otherwise uniformity.

I'm often asked if I use a rigger to paint the reeds; actually, I paint them with my favourite brush - a No 5 Long Flat Series 279 by Rosemary and Co. This brush forms the most beautiful chisel edge, and when loaded with paint, can describe the perfect shapes of reeds, maintaining its keen edge like no other brush can - I LOVE it!  A rigger can't do the job nearly so well, and I only use it to pick out the occasional sunlit reed in the distance, or some tree branches, and to sign my name!
Posted by Peter Barker at Wednesday, June 01, 2016 1 comment: Links to this post 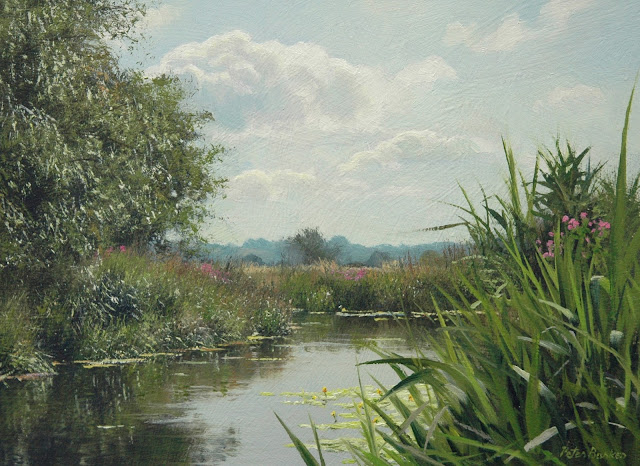 Simple composition this one, and very much my sort of painting of high Summer on the River Welland in Rutland, with thick vegetation of reeds and pink Willowherb and Yellow Water Lilies punctuating the water surface.
Posted by Peter Barker at Wednesday, June 01, 2016 No comments: Links to this post