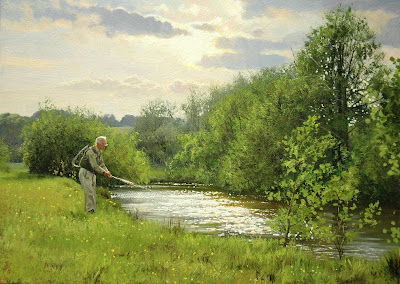 This one is a studio painting after my Cotswold sojourn.  The elderly gentleman was fly-fishing with a Mayfly fly, and I took a couple of photos into the sunlight as he cast his fly, hoping to get something I could make a painting from.  It was about 24 degrees and I did my best to get that feeling of a warm sultry evening, looking straight into the sun.

Oh yes, the title. I was going to call it 'The Old Master', but then I remembered the old Yellow Pages advert on the telly - the slightly older ones amongst you in the UK will remember - where the fictitious old gent was calling in all the old bookshops for a copy of Fly-fishing by JR Hartley, without success.  His daughter then gave him Yellow Pages and he called all the bookshops until he found one that actually had a copy.  The shop asked him his name so that they could put it aside for him....his name of course was JR Hartley himself.  I just thought of him when I saw this chap of similar vintage, so there was the title.

I loved the spots of pure sunlight on the water and glinting off his rod, but most of all, that look of concentration on an old master of the craft, watching his lure as it passed over a previous rise of a Brownie.  He didn't catch one when I watched, and he graciously apologised for not 'performing' on cue.  I carried on walking upstream to paint 'Bright Evening by The Windrush' and the angler caught up with me later, saying he had a painting by that great Cotswold Watercolourist James Fletcher-Watson, painted from a spot near where I had chosen.
Posted by Peter Barker at Monday, June 04, 2012