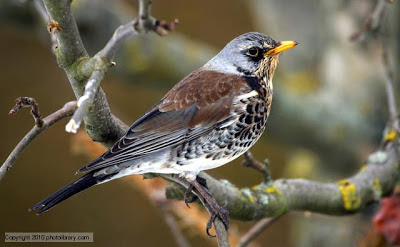 Yesterday when driving to Stamford, we drove over the top of a lump of snow, which I saw at the last second was an injured Fieldfare, hit by a car.  We pulled in and turned around a couple of hundred yards down the road and sped back to the spot to see if the three cars following had squashed the poor Thrush, but it was still there, slumped on its side.  I ran across the road, picked it up expecting the poor bird to be badly injured, but it had just a minor bruise on its rump and was dazed.  I took it into the snow covered field a good 70 yards from the road, perched it on a branch, checked its wings and legs, which were fine, and left the bird to recover.

We stopped about an hour later and found the Fieldfare had gone and there were no tracks of a predator about, so assumed the beautiful bird had returned to its flock.  Felt very good for the rest of the day to have rescued the poor bird from certain death.  One of those real feel-good moments.......sigh!
Posted by Peter Barker at Sunday, January 20, 2013 7 comments: Links to this post 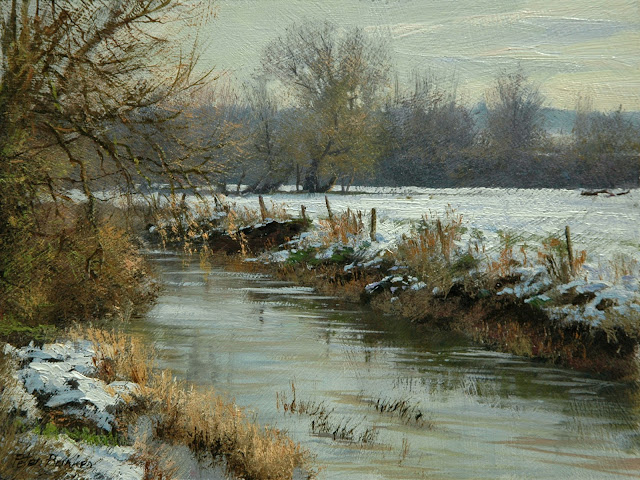 You'll all have wondered where I've been - have I forgotten how to paint?  Well, I was wondering that same thing myself..not where I've been, because I know that, being me....no, have I forgotten how to paint.  Well, I've been painting....walls and bookcases after building work in my house, but it's been about three weeks since I last daubed some paint on a board.  Still up to my eyeballs in decorating, yesterday we woke to snow on the ground, so the lure was just too strong and I packed up my backpack and got out there.

Yesterday was a bit of a comedic disaster, but more of that later......

Today, I went back to my local river, just four miles from my studio, and trecked some distance and back again before settling on this view.  It was bitterly cold, but the sun came out, so with my back to the gentle breeze, it was actually quite pleasant.  I scrubbed in the composition quickly, speed being of the essence with the days being so short, and plein air painting is always a great challenge; choosing which light effect to put down when the atmosphere and colours change, sometimes quite radically.  The two hours sped by fast and painting on site is a glorious experience, even though half-way through the wind got up, and by the end my fingers were all frostbitten, despite painting with woollen fingerless gloves. Don't worry though people, I sawed them off when I got home, so the pain is gone.

Here's a view at the end of the painting: 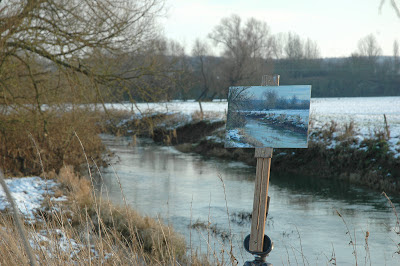 For company during the painting session, a pair of Swans glided by, a Kingfisher shot through with its flash of electric blue, a pair of Moorhens quarked, a pair of Buzzards pewed overhead, and a Snipe wheeled by with its harsh screeching.  You're never alone with a strand.....

There was also a flock of Goldfinches feeding twitteringly on stands of Burdock, prizing out the seeds from the impossibly clingy seedheads.  Can you spot twelve of them here? Click photo to enlarge: 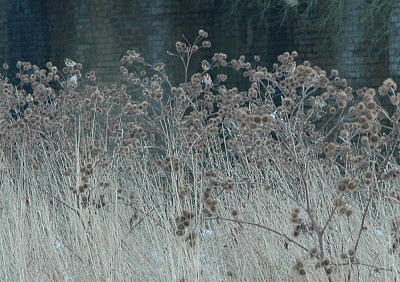 Alas, no Otters showed up.  By the way, you know why the Otter suffered such a drastic decline in its numbers?  It coincided with the popularity of Indian food in Britain...in particular, the dish most favoured by the Brits, Chicken Tikka Masala, which was superseded by Chicken Tarka Masala.....like Chicken Tikka Masala.....but 'otter.
Posted by Peter Barker at Tuesday, January 15, 2013 8 comments: Links to this post