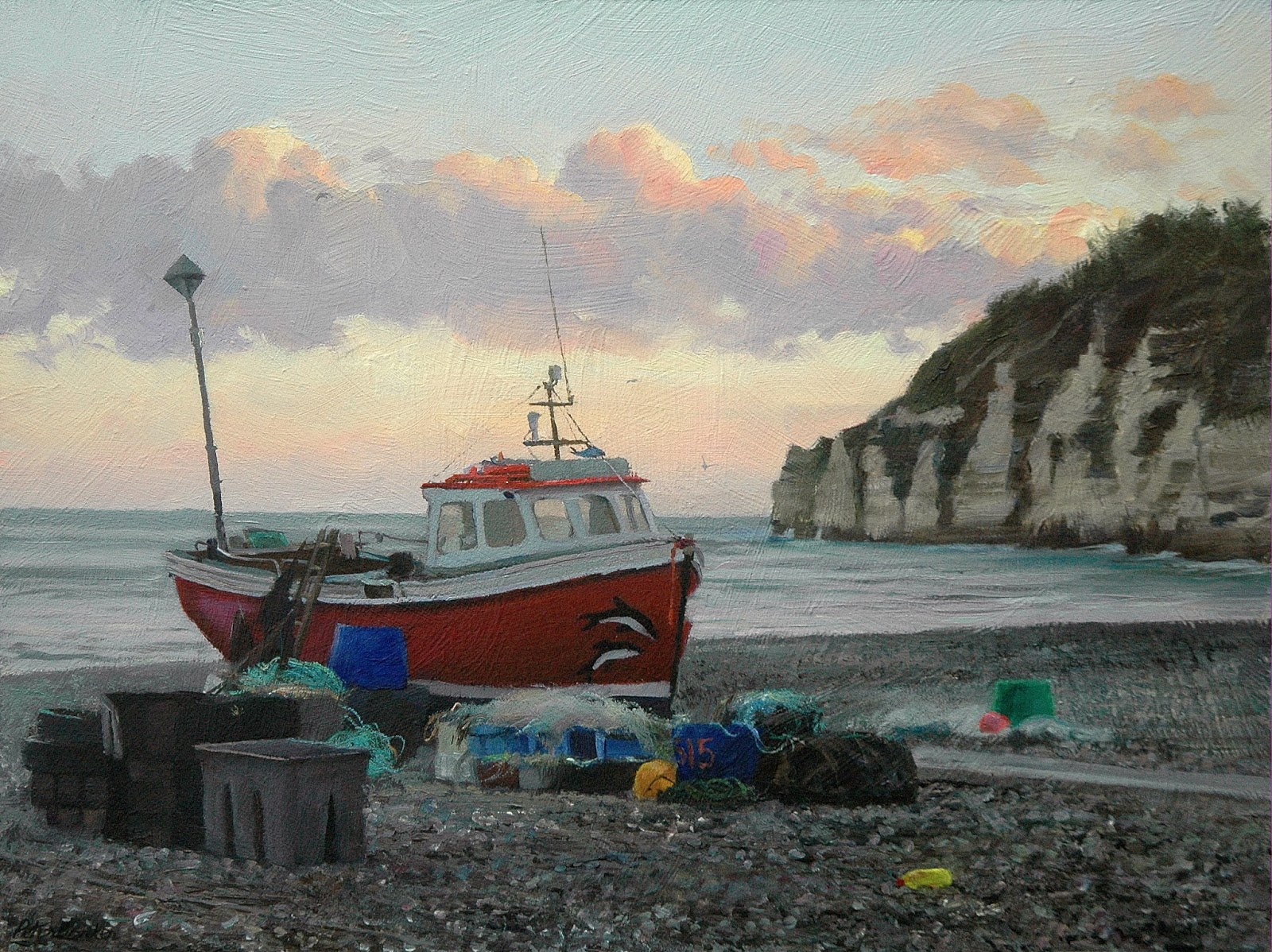 Painted from reference last month when dropping off some paintings to Marine House Gallery in Beer, with the sun going down over the great chalk cliffs on the right. The assortment of fishing vessels always provide great painting subjects, together with all the bins, nets and gubbins strewn over the shingle beach. I particularly liked the bright lemon yellow Fairy Liquid bottle (other brands are available) in the foreground, which I moved to the right a little for the sake of composition - not to unsettle the eye, being in the centre of the picture plane.

The red top-lit clouds provided a nice echo to the red boat, with the strong dark cliffs accentuating their colour and giving a good anchor and balance to the L-shaped composition.
Posted by Peter Barker at Sunday, April 26, 2015 No comments: 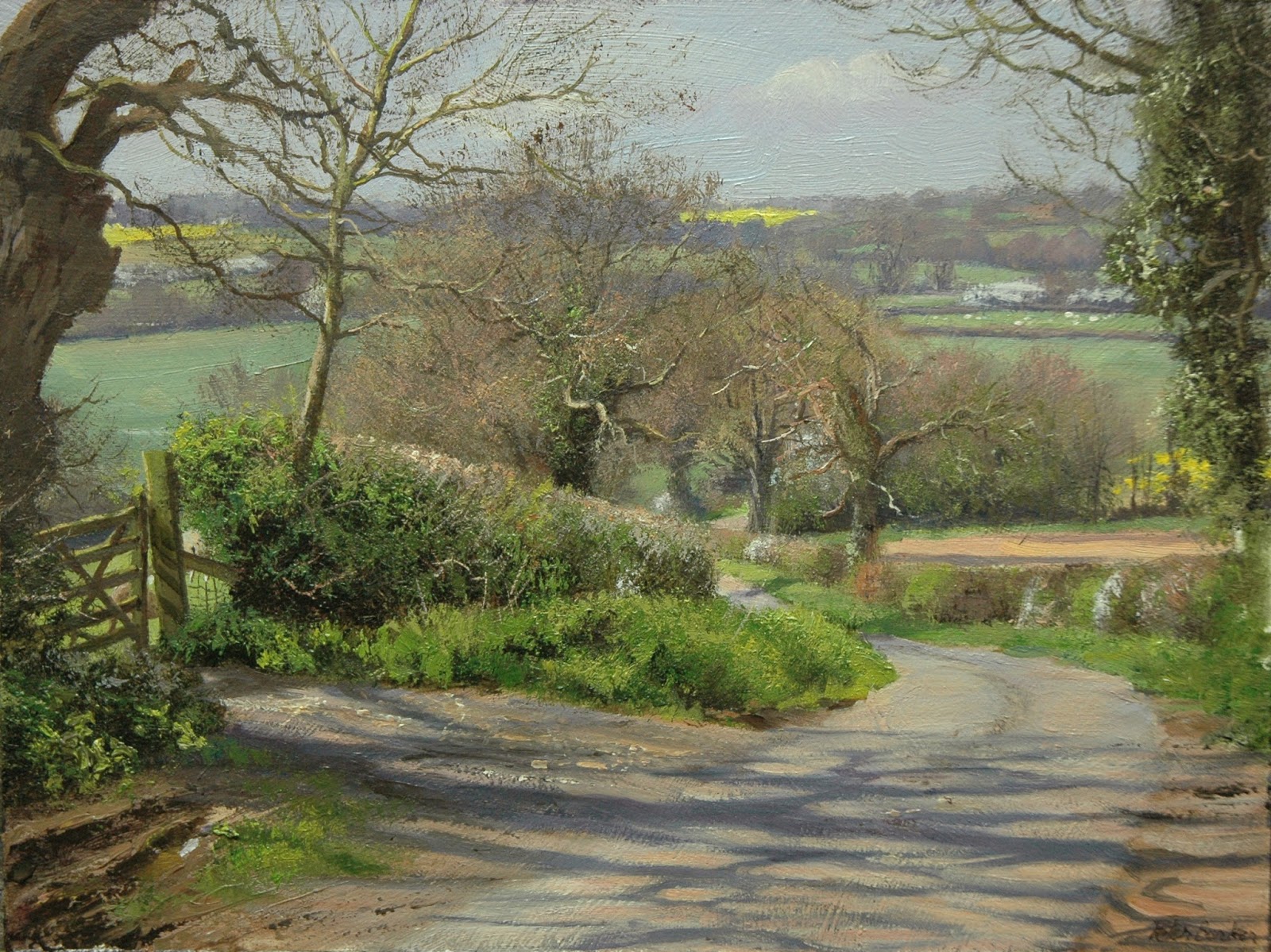 I painted this one en plein air on Monday morning, but what with the new gallery stuff taking up my time, I've only just managed to tinker with it in the studio and finish it off to satisfaction - probably tinkered a bit too much, but that's me! 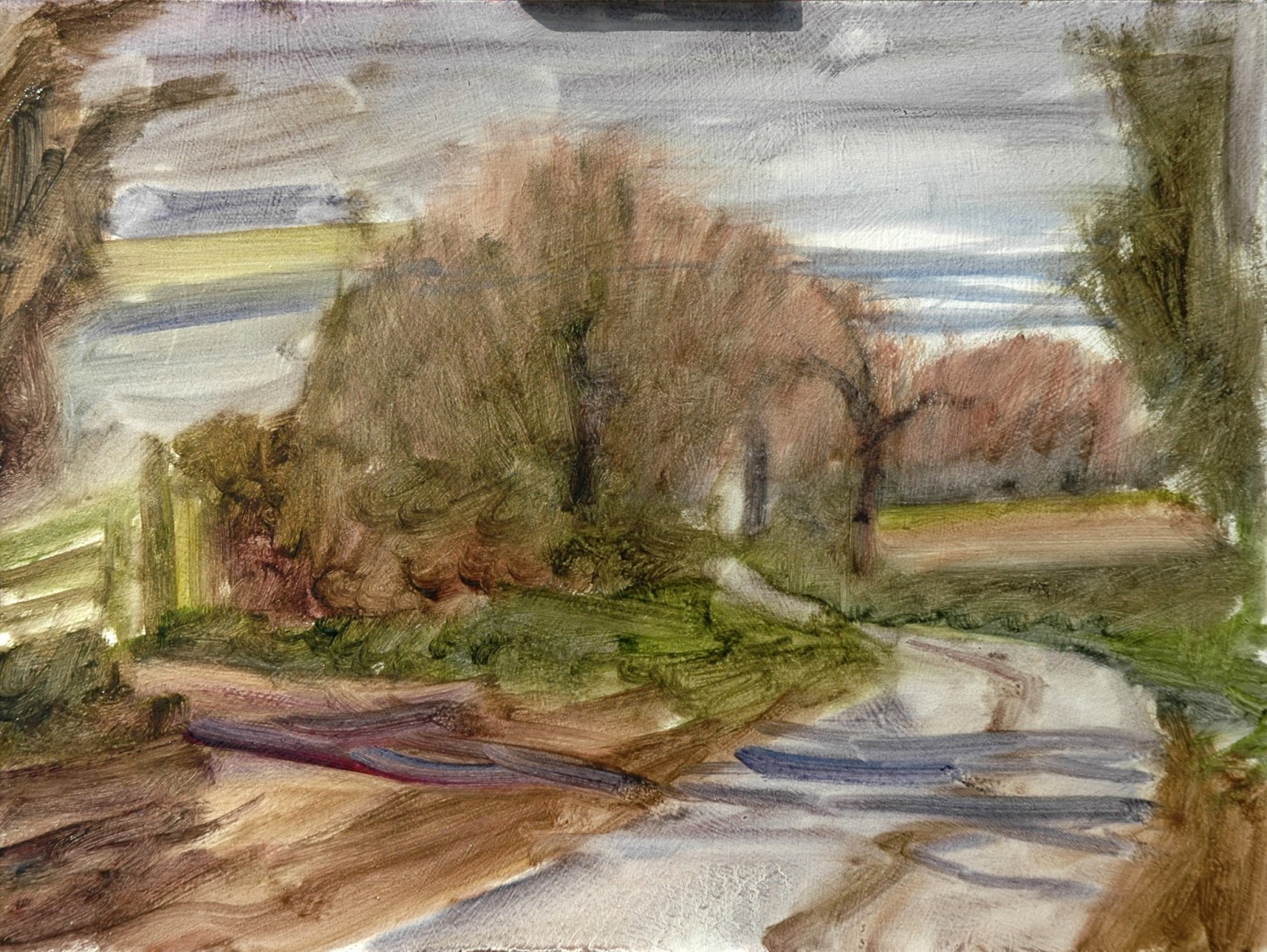 The initial scrub-in as I call it, just plotting the main shapes and basic undertones in diluted, thin, turpsy paint. 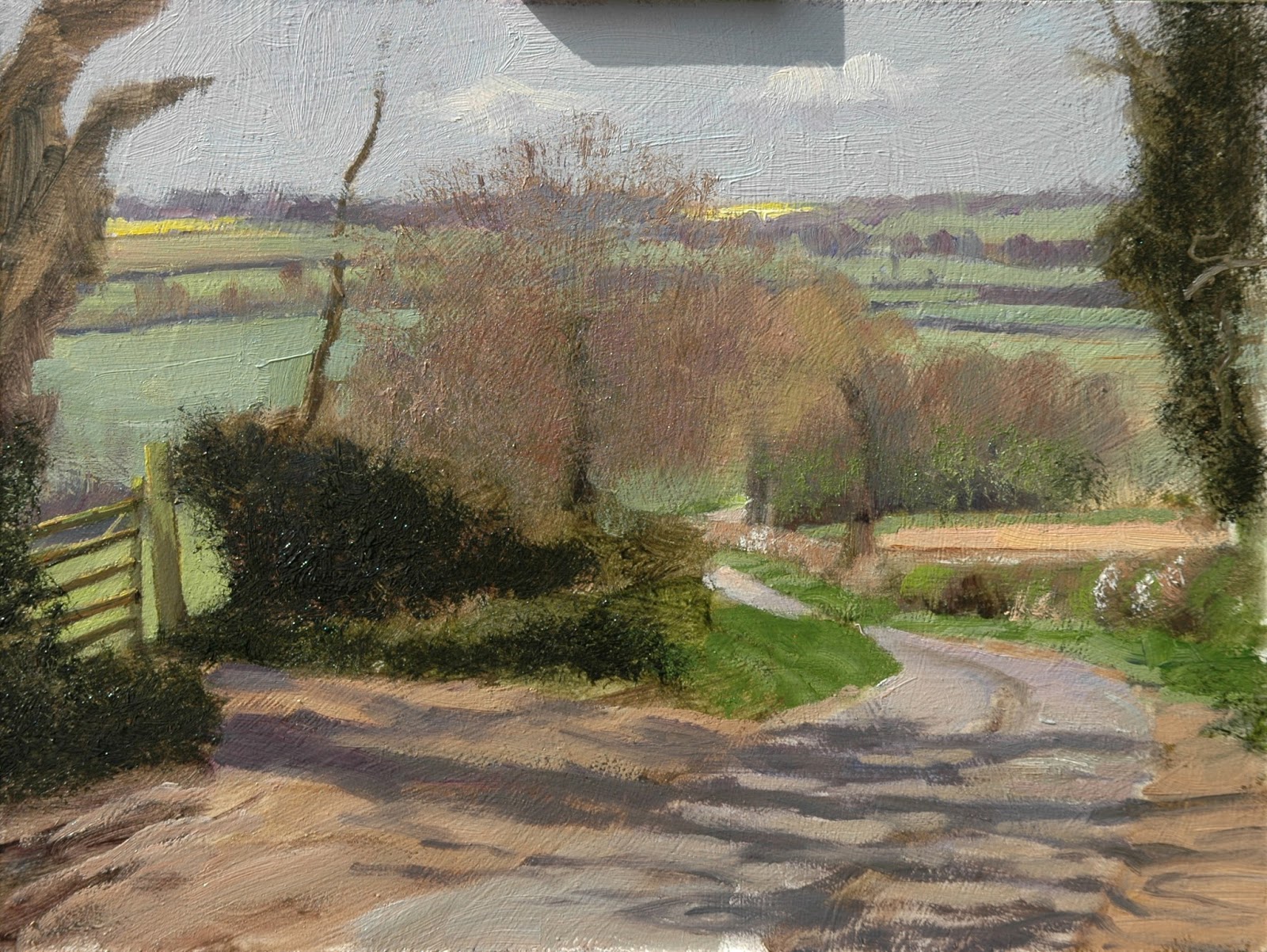 Now a little more definition using white in all the mixes, apart from the darks of the hedgerow, ready for lighter tones to be added. 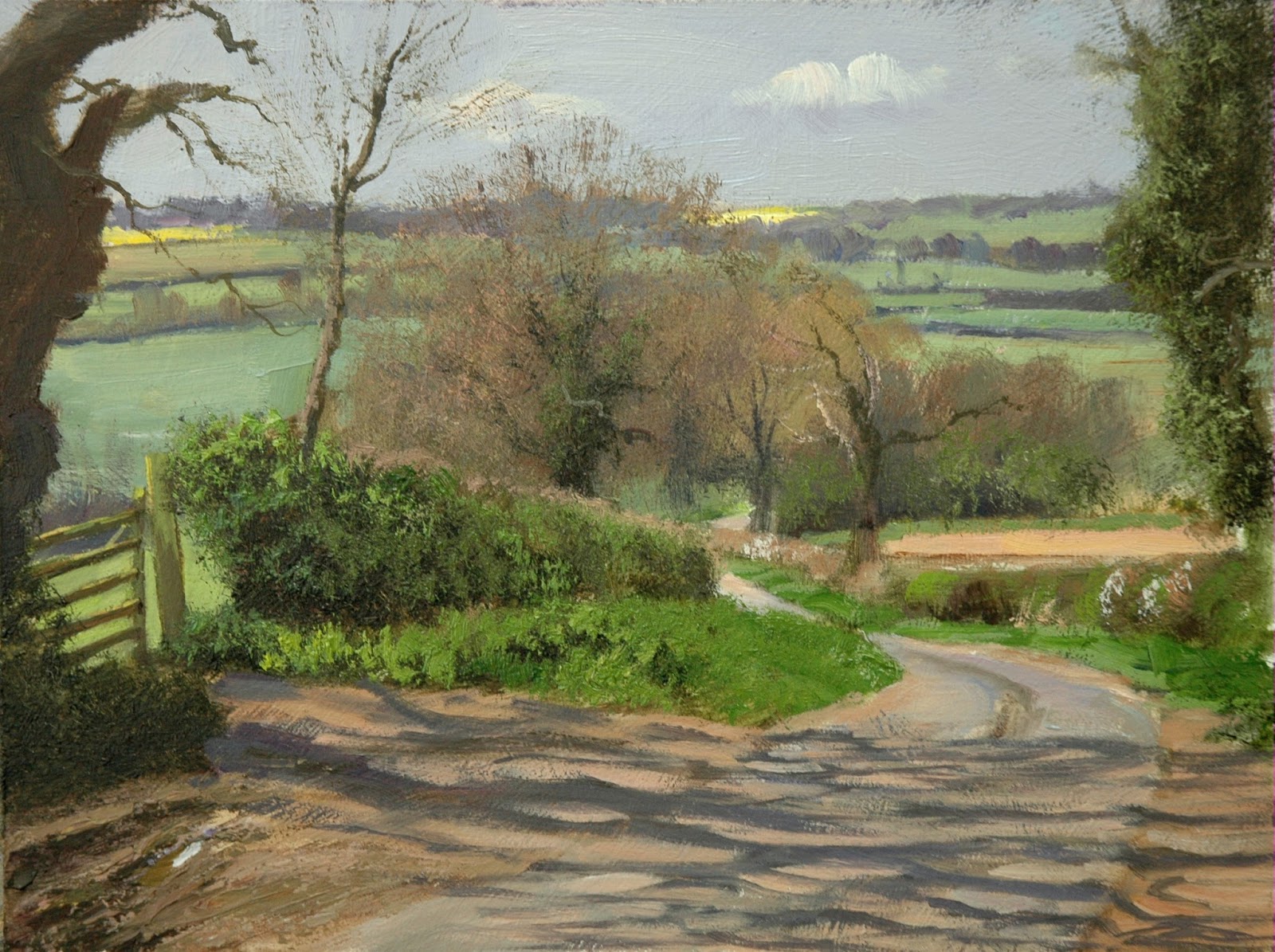 As far as I got in the two hours before the light changed too much, but the basics dealt with. I just refined everything a little and toned down that cloud, making it a little pinker which is how I remembered it. It's never easy painting with full sunlight on the board, and harder still when the sun turns around and the light falls across, showing every contour of the surface.

But, it was a joyous experience, being serenaded by Buzzards pewing, Magpies chattering, Chiff-Chaffs chiff-chaffing, lambs bleating, Weasels scampering and the general glorious cacophony of birdsong.
Posted by Peter Barker at Wednesday, April 22, 2015 2 comments: 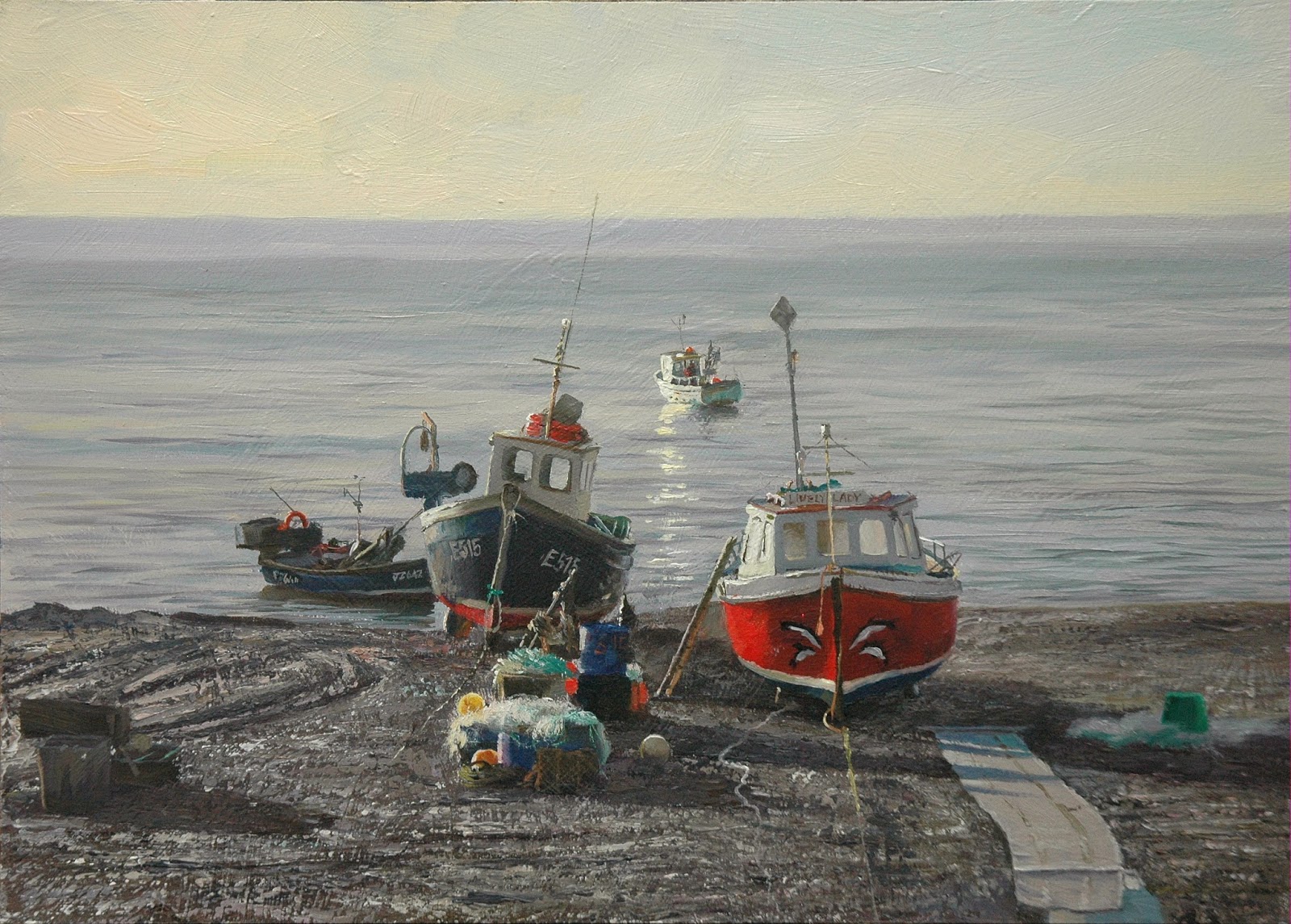 Another one for my solo show in Beer. The early morning fishermen gather on Beer beach and go off on the gloriously colourful boats for a day's Mackerel fishing with rod and line. These boats are a dream for artists like me, especially in the morning light, when the dawn sun pierces through from the east, lighting up the sides of the vessels.

I liked the nicely placed old conveyer belt on the right, which provided a nice lead-in, and on the right the ruts in the stones did similar, to push the eye into the picture plane to the triangular focal point.

The boats are relatively straightforward when you've done the drawing, a bit fiddly, but straightforward. The most difficult part of the painting is making the pebble beach look convincing. Sand's a doddle, but depicting a million pebbles, all lit by the sun, is more tricky. I tackled them by laying down a relatively thin underpainting, then dragged progressive layers of colour with a pallette knife, then when the whole surface was just tacky, dragged the lightest tone over with the knife again to simulate the sparkling highlights.
Posted by Peter Barker at Thursday, April 16, 2015 3 comments: 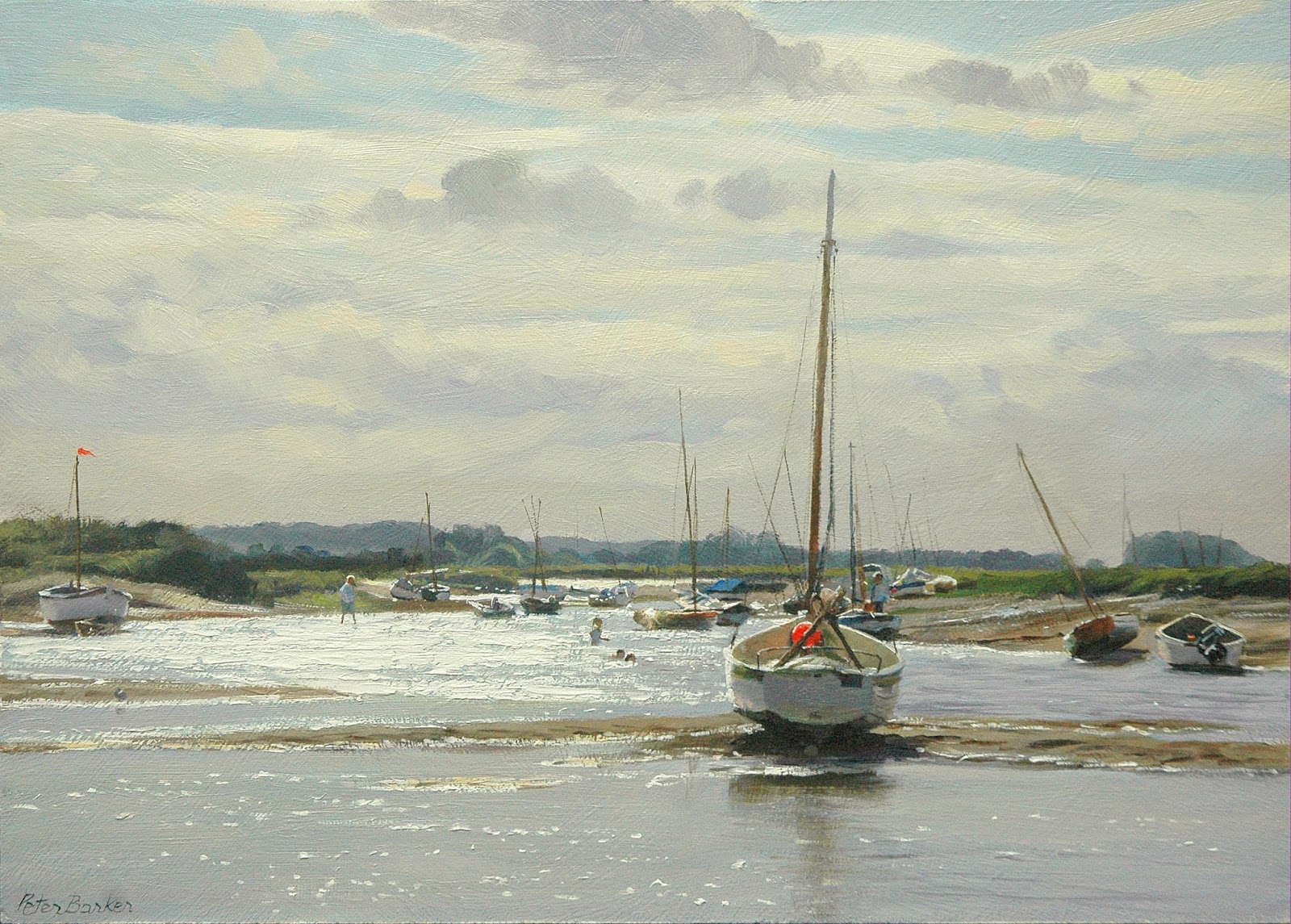 This one is a Norfolk painting that I did as a demo piece for another art society, finished off in the studio yesterday.

The hook for this one was the gorgeous sunlight reflected in the water, with the boats arranged in a perfectly haphazard way, pointing every which way. I love putting in the little nuances in a painting, like the pure sunlight bouncing off the gunwale of the boat just off-centre, above the children swimming in the water, and the highlight on the head of the chap wading in the shallows - they all help to give added interest to a piece.
Posted by Peter Barker at Wednesday, April 15, 2015 No comments: 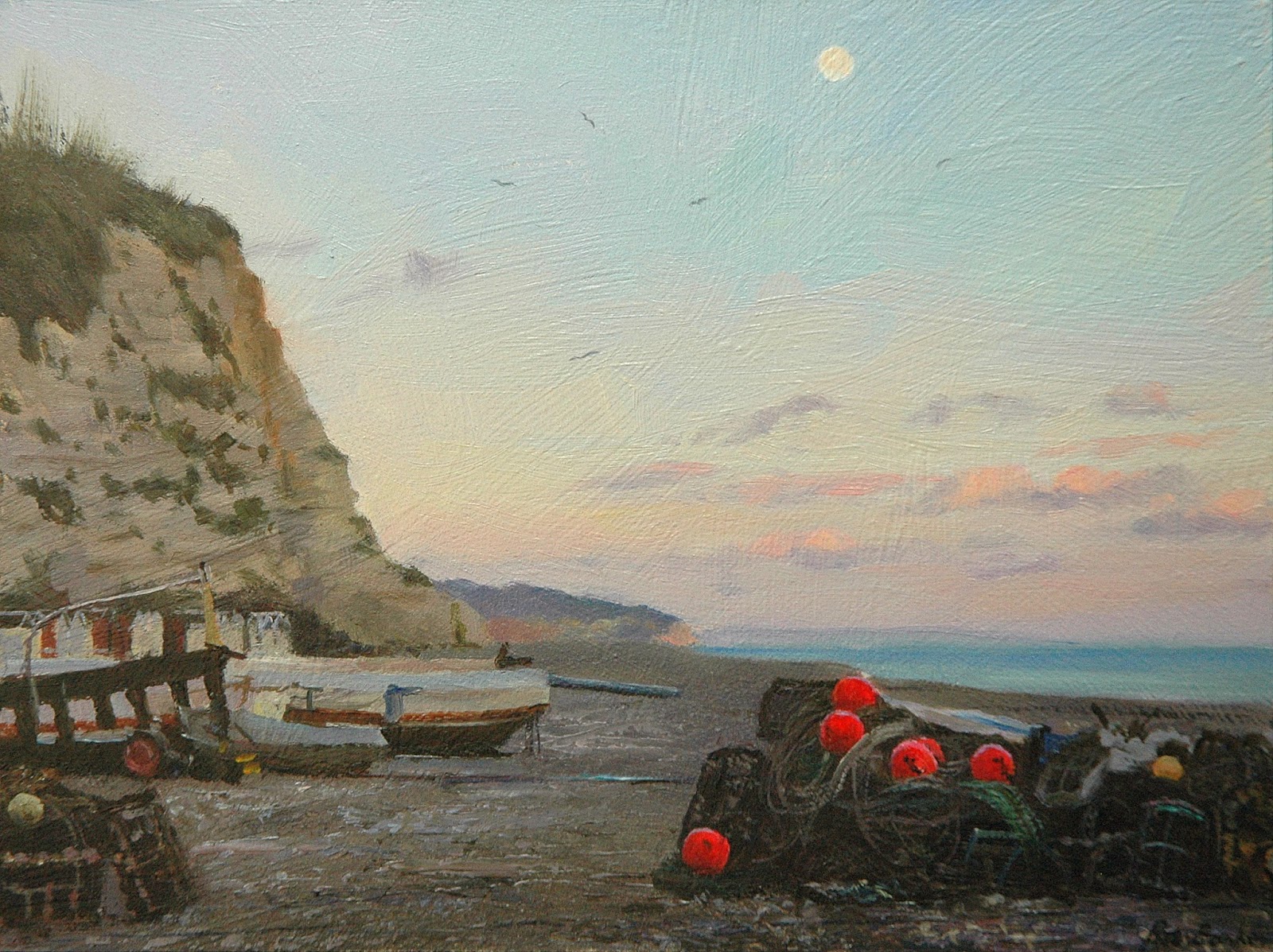 Oil on Board, 6x8 inches

Well, it was about time I started painting in earnest for my solo show in November in Beer, Devon, so here's one for start-off.

I liked the moon starting to glow in the fading light, and the echoed spheres of the equally glowing red buoys - seemed to make a pleasing composition, together with the great chalk cliff and fishermen's boats and lobster pots.
Posted by Peter Barker at Friday, April 10, 2015 1 comment:

Rutland, the most desirable rural place to live in England!

From the Telegraph a couple of days ago:

''Residents of the picturesque county of Rutland can lay claim to having the highest standards of living in rural Britain, after it was declared the country's best rural place to live.

The sleepy county of Rutland in the East Midlands countryside has been named as the best rural place to live in Britain."

Why do journalists always describe idyllic rural places as 'sleepy'?  I've never noticed anyone falling asleep in the leafy lanes around here!

Anyway, it's another great reason to come and visit my new gallery, Peter Barker Fine Art, when we open for business SOOOOON!  I can testify that the coffee and cakes in the adjoining Orchard Café are worth a visit alone, so look out for our opening and have another butcher's at the fabulous line-up of artists we've gathered together at www.peterbarkerfineart.co.uk

Posted by Peter Barker at Wednesday, April 01, 2015 No comments: