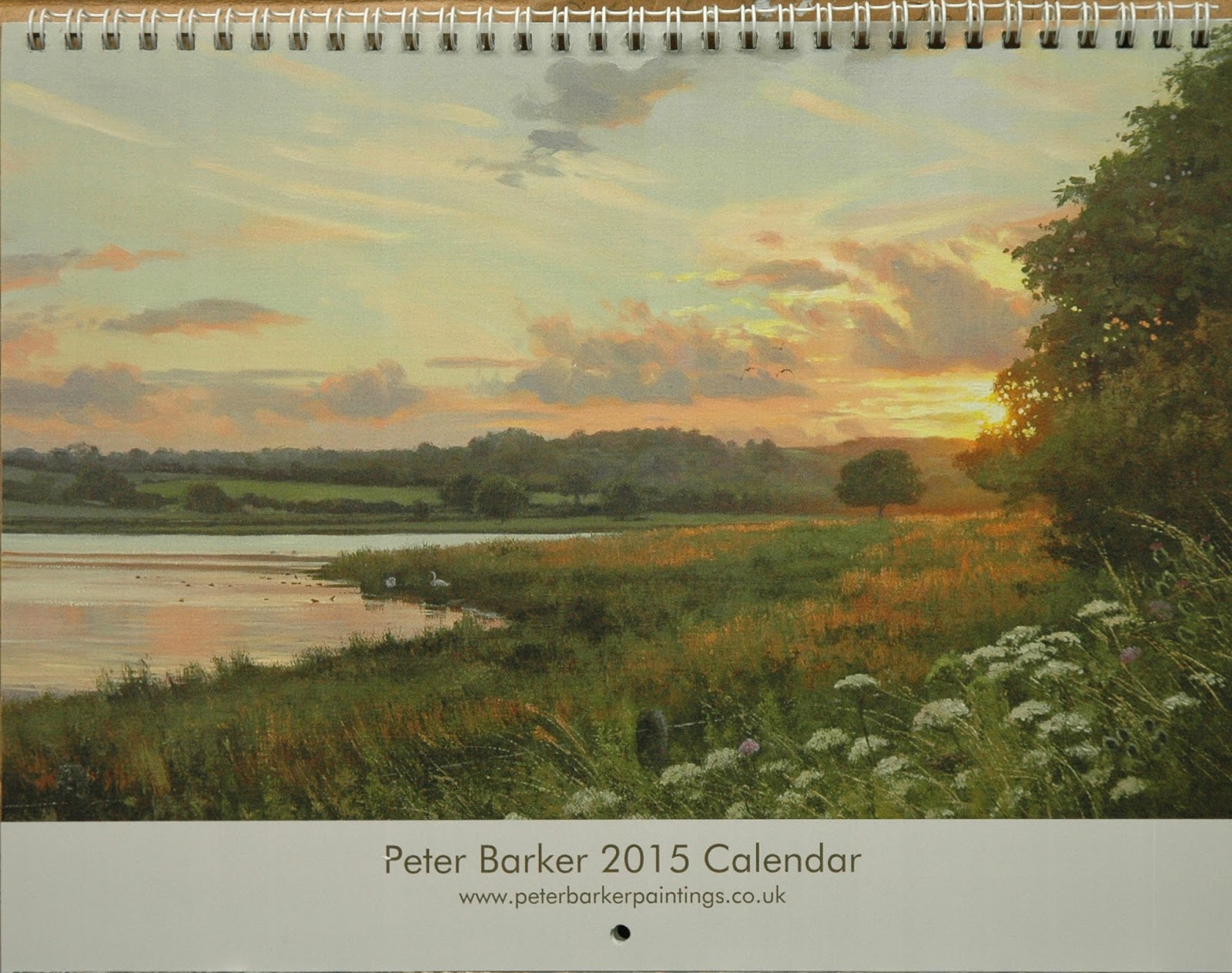 I have a limited number of 2015 Calendarsfor sale at £12.50 including postage and packing. As the shop page of my website is misbehaving at the moment, if any of you would like to buy a calendar, please email me by clicking HERE, and say whether you would prefer to pay by credit or debit card via Paypal, or send me a cheque.

The layout looks like this, with 12 seasonal images, and the size of the calendar is 8.5" x 11", or twice that opened out for each month, looking like this: 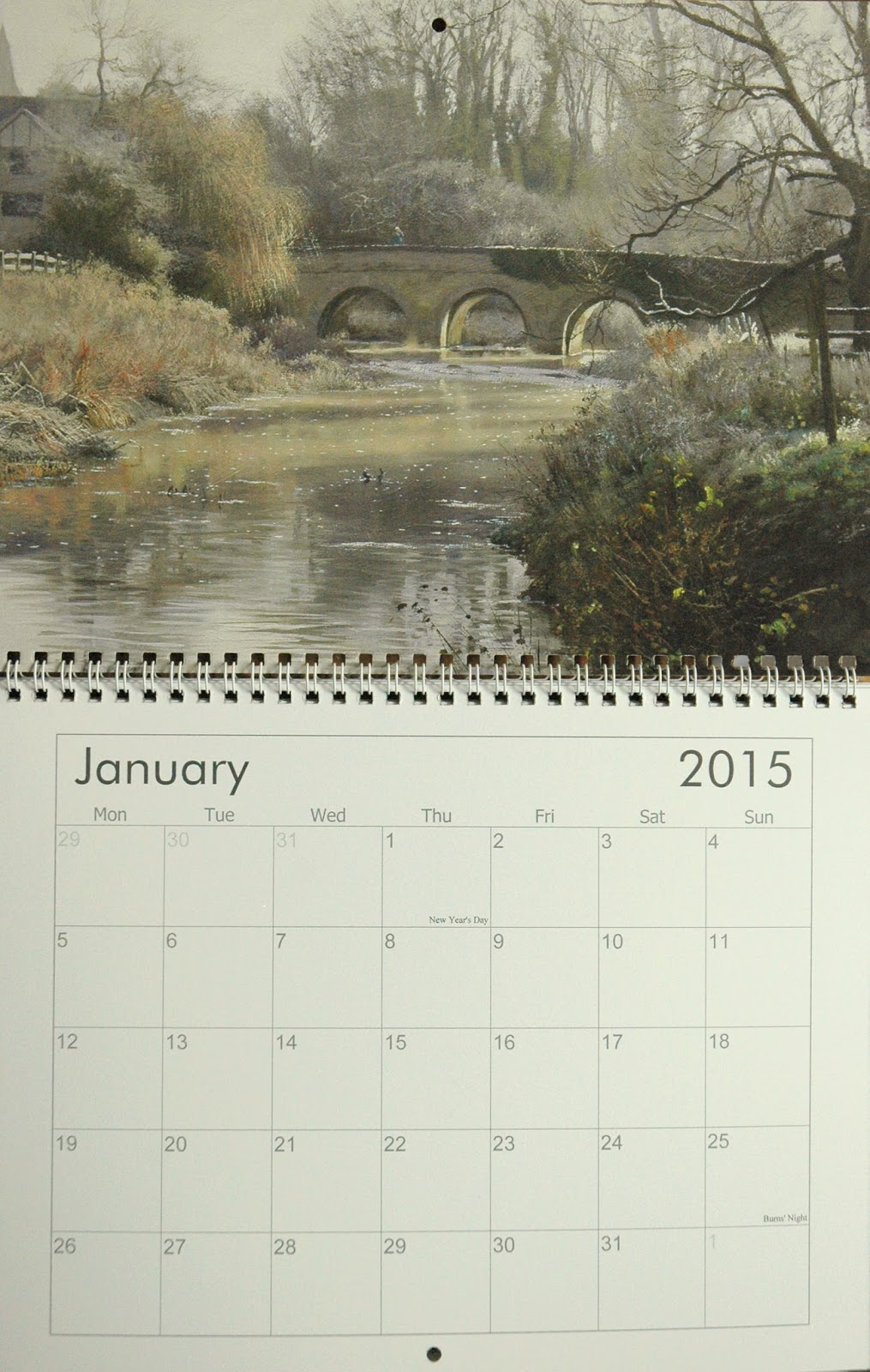 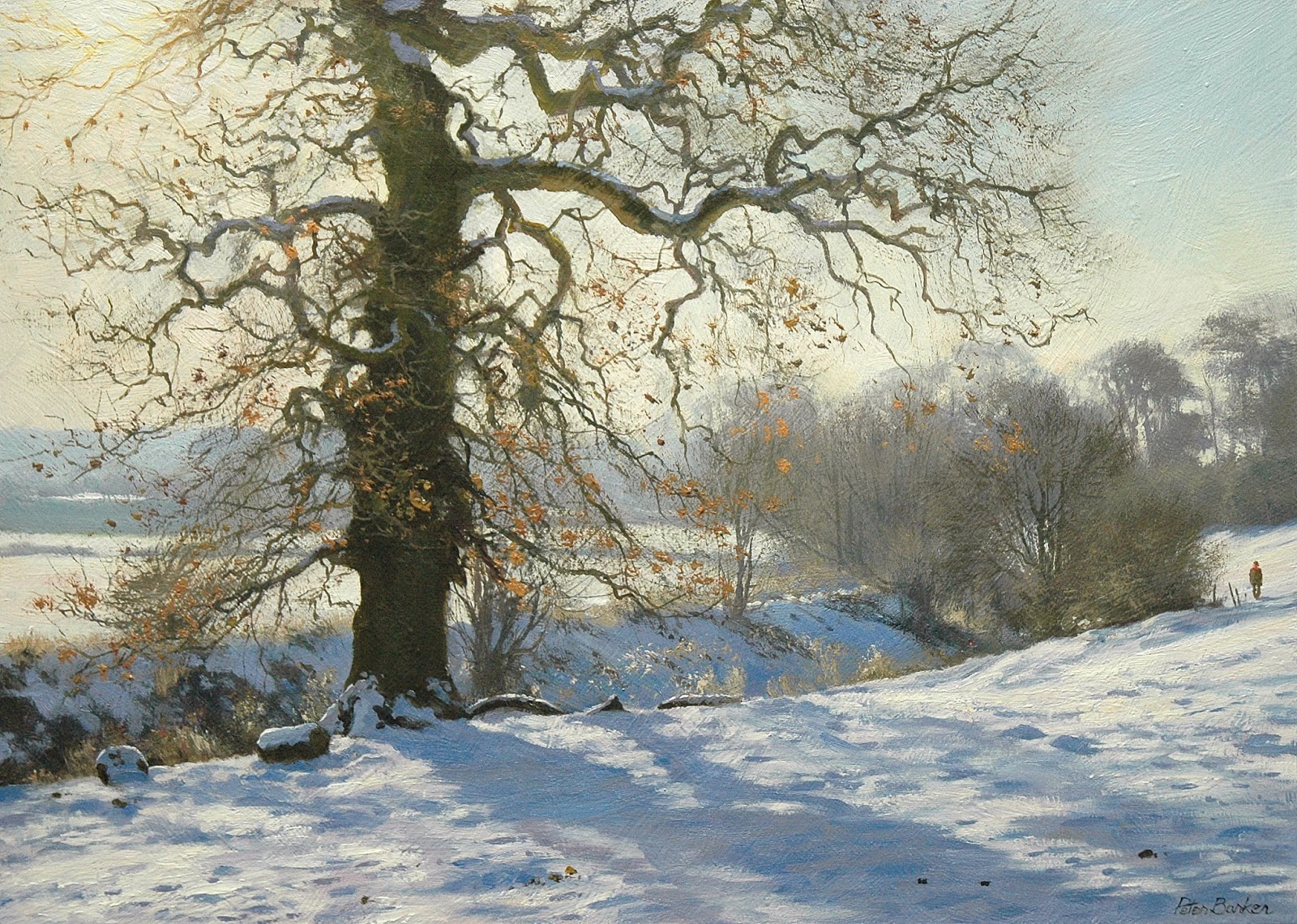 Here's a snowy painting, upon request from Iona House Gallery in Woodstock for their Winter Exhibition next month.

Painting snow holds great attraction for most artists, me included. It's not that easy to paint either - as I always say in my demos, we all know that snow is white, but to paint an effective and convincing painting, we have to observe both the colour and tone, and that is where so many budding painters fall at the first hurdle. Snow is only white when you look at it face on with the sun shining on it. Otherwise, it only appears white because of its surrounding colours and tones - our brain tells us it's white, even though  a lot of it here is quite a dark blue/mauve colour.

There is actually no pure white at all in the snow in this painting - the only bit of pure white is near the top left, depicting the blinding sun, and even that will appear darker than the surrounding white on your screen! The photo doesn't quite pick up all the colours accurately, but the entire picture was painted with my usual three colours, Cadmium Yellow Light, Permanent Rose and Cobalt Blue, plus Titanium White of course.

A little nuance I did like, was the gorgeous light underside of the big branch in the upper centre of the picture plane, receiving reflected light from the gleaming snow beneath.
Posted by Peter Barker at Friday, December 12, 2014 6 comments: Links to this post 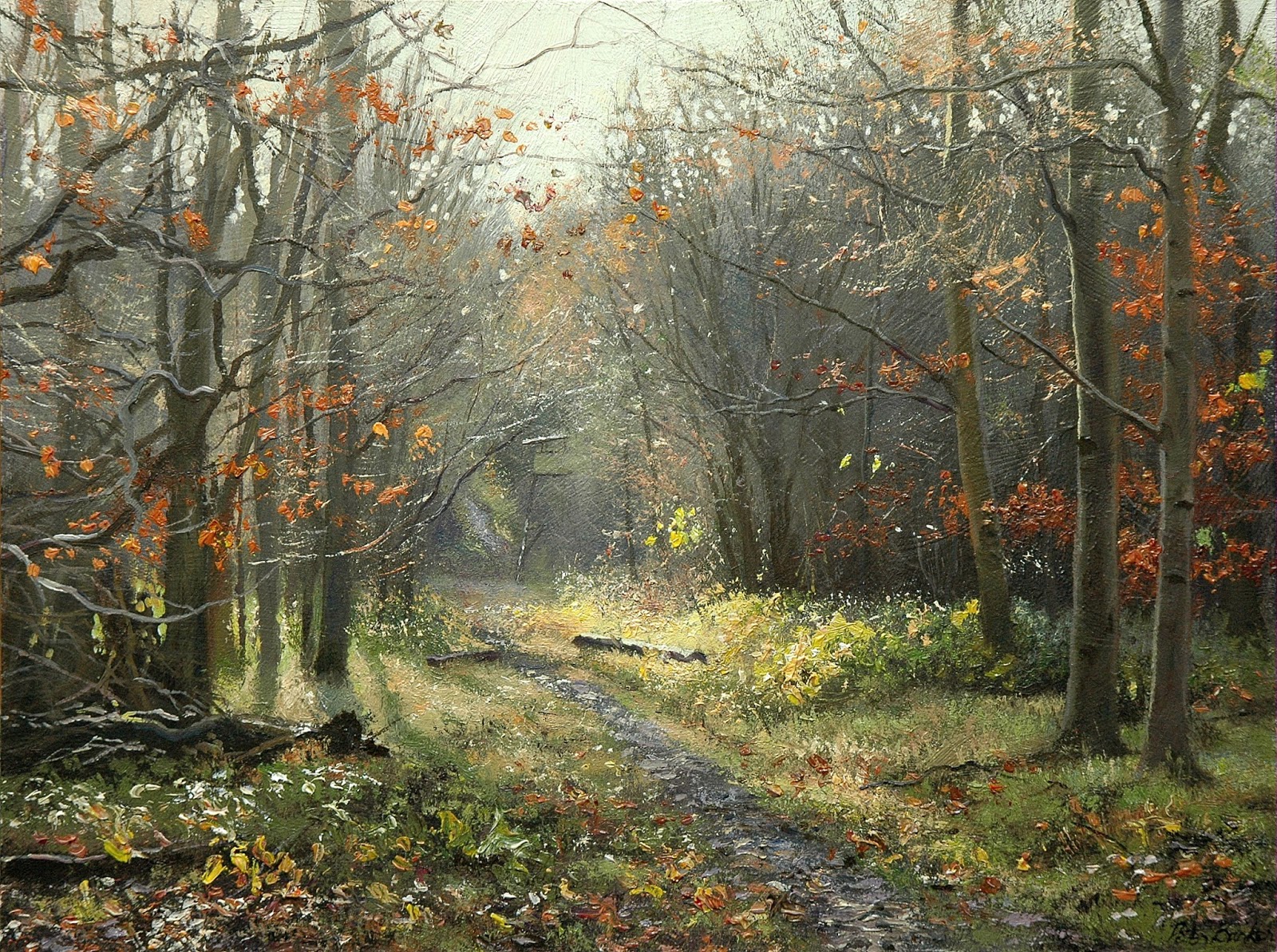 Well, back to the drawing board, or at least the easel...just as soon as I finished all my framing for my show at John Noott's (see previous post), and basked in the ego-boosting of an exhibition opening, another gallery calls me and asks for some new work for their winter show next month. However, having not painted anything for over four weeks, it was lovely to be putting brush to board again, and despite the inevitable "I wonder if I can still do it" thought, happily, and with a big sigh of relief, I find I CAN still do it....phew.

This one is a December view, at a local woodland called Bedford Purlieus. An odd name, dating back to 1598, when the purlieus was a term for woodland law, and the Bedford bit dates back to when the wood was owned by the Duke of Bedord. The title refers to the look-out partly hidden in the left-centre of the picture, from where observers can see deer beneath, who are unaware of being observed.

Yesterday, it was the annual mecca for oil painters - the opening of the ROI Annual Exhibition at the Mall Galleries. It was a great day, seeing all the great work in the show, and 'talking shop' to painting pals like Haidee Jo Summers, Roy Connelly, Tom Hughes, David Pilgrim, Graham Webber, Gerald Green, Penny German, Hannah Merson, Peter Brown, Trevor Chamberlain, Oliver Bull and David Curtis. The show is on until the 21st December and is well worth a trip, as is my own exhibition at John Noott's of course - on until Christmas Eve!
Posted by Peter Barker at Wednesday, December 10, 2014 1 comment: Links to this post

Please forgive another reminder that my solo exhibition starts tomorrow, Saturday 6th December! I hope to see some of you there. All 41 paintings, 7 of which have already sold, can be seen at Peter Barker Solo Exhibition
Posted by Peter Barker at Friday, December 05, 2014 2 comments: Links to this post 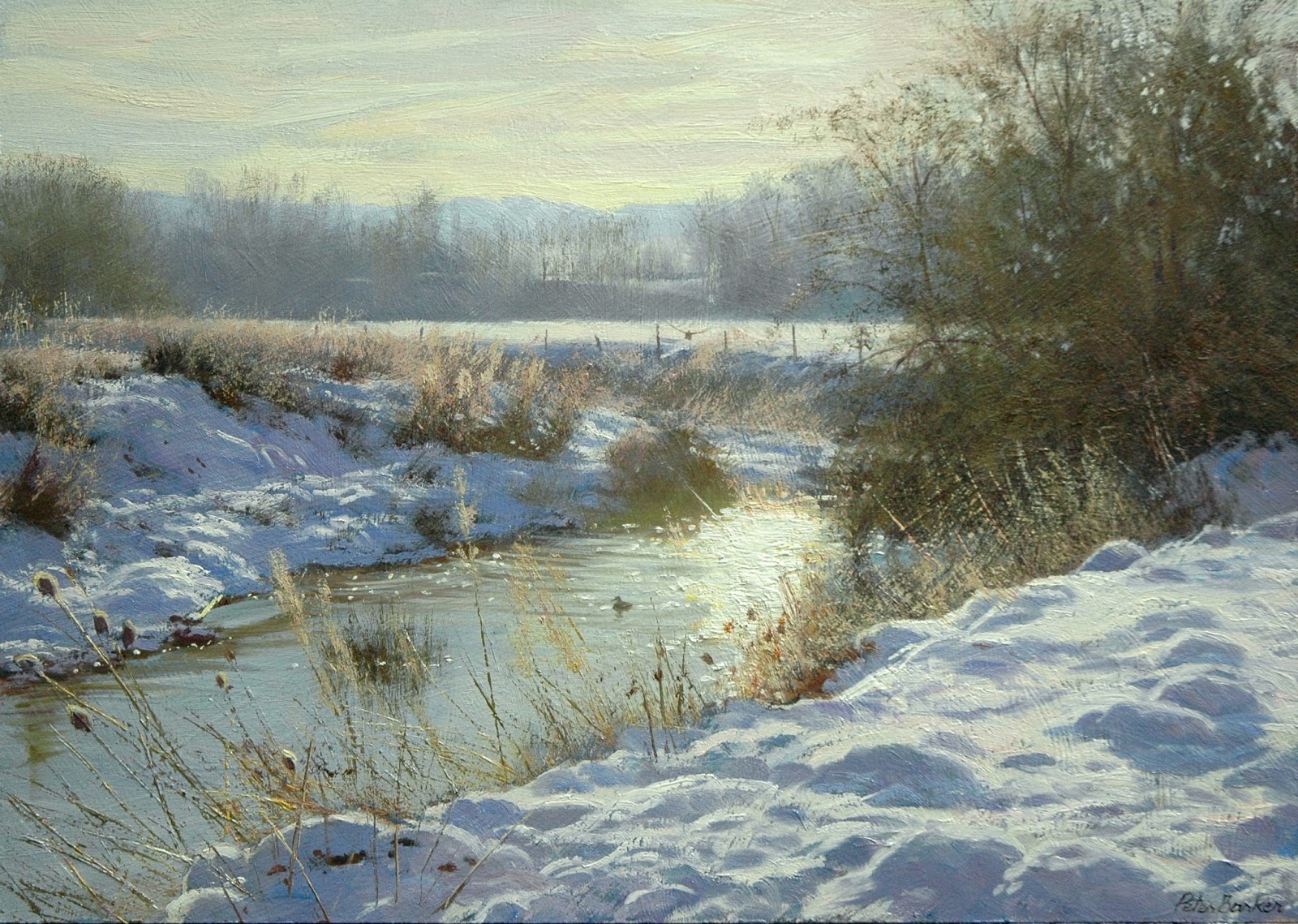 Fresh Snowfall by the Welland
Oil on Board, 10x14 inches

Next week, the ROI Annual Exhibition at The Mall Galleries opens on Tuesday 9th with the Private View, and then opens officially to the public on 10th December until 21st December. It's a superb exhibition and represents the cream of painters who use the oil medium. A selection of works can be seen by clicking here.

I have one painting in the show, photo above. Anyone who would like to attend the Private View next Tuesday 9th December, please email me by clicking Email and I will send you an E-invite for you to print off and get in the show FREE.
Posted by Peter Barker at Thursday, December 04, 2014 4 comments: Links to this post