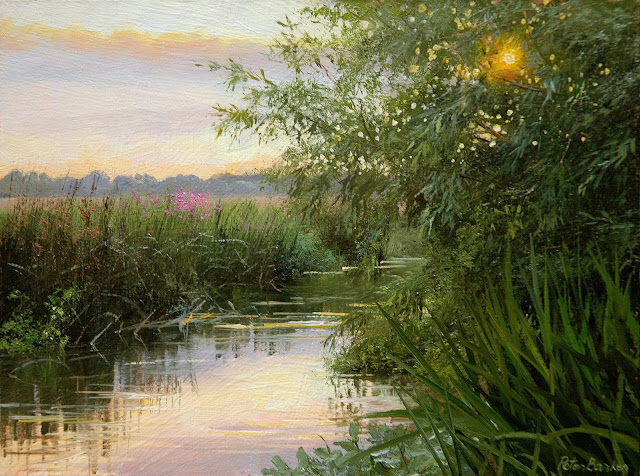 Saw this view a few days ago whilst walking along the backwater of the River Nene, as the sun was near setting in the western sky. I just love a golden sun viewed through the leaves of a tree, so just had to try to capture it.

As I have said many times before, the painter doesn't have a colour bright enough to convey the brightness of our near star, so you just have to use a few tricks in attempting to make the viewer be fooled into squinting at the painting, as if to hide his or her eyes from the sun. What? I can't tell you that, I'd have to kill you all...
Posted by Peter Barker at Tuesday, August 30, 2016 No comments: 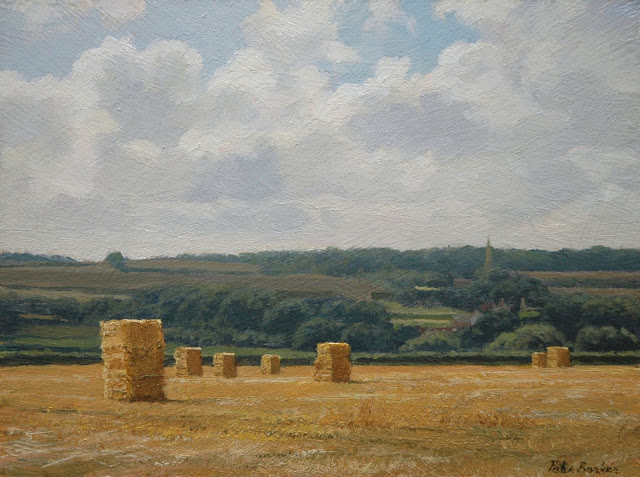 
Harvest time is always a fascination for artists, and when the farmer uses square, or at least rectangular bales, they form such beautiful patterns, and when the sun shines, the light on them, especially with the sun behind, forms a golden halo around them - such fun to paint! 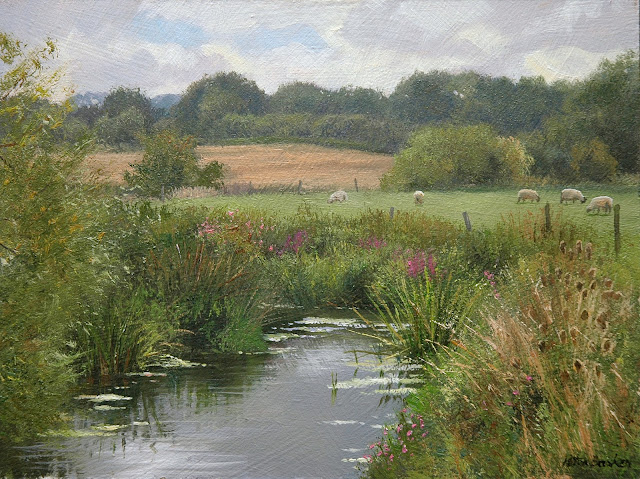 This is a view I have painted several times over the years - the River Welland near Duddington. The Greater Willowherb and Purple Loosestrife abounds at this time of year, but sadly, another intruder is quickly taking over - the giant Himalayan Balsam, a beautiful and showy plant in its own right, but a real bully in the way it chokes all the surrounding vegetation. It has an ingenious way of spreading itself; when the pendulous bag of seeds is ripe, it has a spring-loaded mechanism within, and when the seed-head cracks, either spontaneously, or when a human or other animal touches it, the seeds are propelled, pinging out several feet. So, once it gets a foothold, the plant very quickly speads along a riverbank, elbowing out everything in its path. In some places, because it is such an invasive, unwelcome foreign interloper, attempts are made to eradicate the weed, but it's here to stay methinks, much like the grey squirrel.
Posted by Peter Barker at Tuesday, August 30, 2016 No comments: 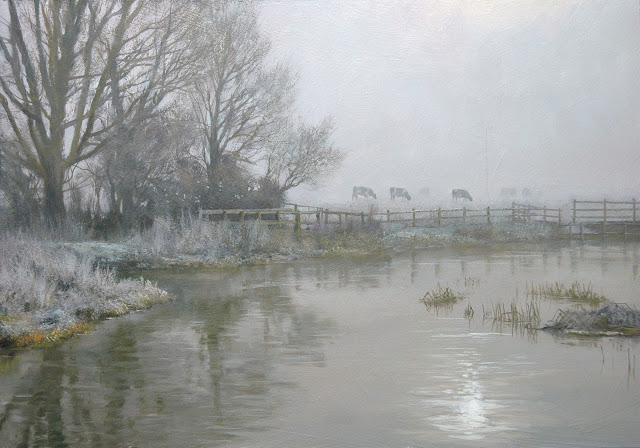 I needed to get one more painting done to submit for the annual Royal Institute of Oil Painters (ROI) exhibition, entries closing today at noon, so I managed to finish it at 1.45 this morning, just ready to photograph and enter on to the long-winded submission form...phew.

I changed my mind about the composition of this - here are a couple of stage photos: 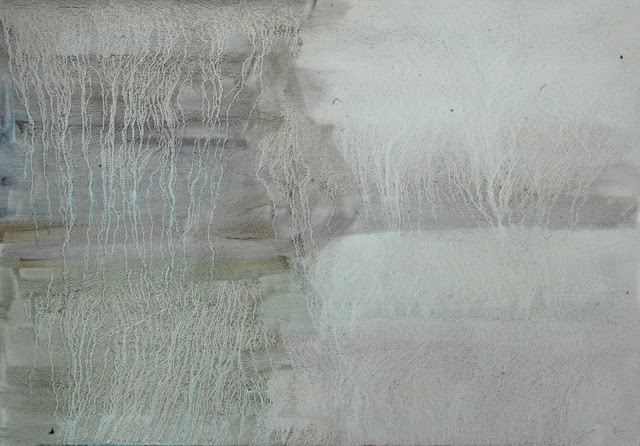 Initial wash stage, with very turpsey, neutral colour put on just like a watercolour wash, letting the colour drain down, giving those gorgeous patterns, a little of which would be left showing here and there to convey the network of feathery branches... 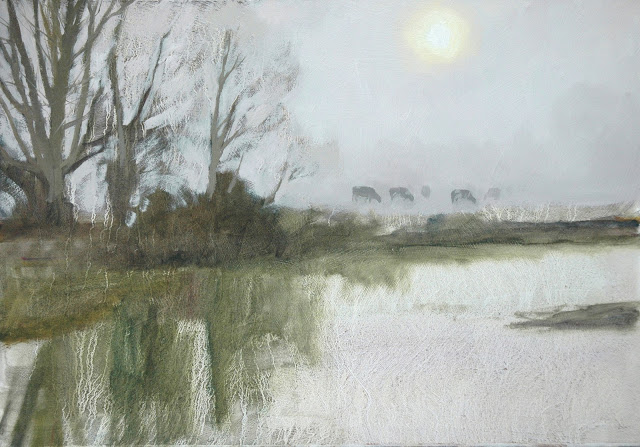 And here, a little further on, you can see I have placed in the cattle and painted the sky, with a watery sun breaking through the fog. After a lot more work on the trees and bank-line, I finally painted in the water, with the corresponding reflection of the sun. After stepping back (I always paint standing up these days) I wasn't happy with the balance somehow. Measuring where the reflection of the sun would be (from the unseen horizon, NOT from the line of the river bank) it was unsettlingly midway between the river bank and the bottom of the picture. It just didn't look right, so I decided to paint out the sun altogether and just suggest the light of it at the very top of the painting, but placed the reflection of the unseen sun near the bottom of the water. I was much happier with the result. We'll see if it will curry favour with the ROI hanging committee - a thankless task, with so many good paintings to be given just a few seconds to look at.
Posted by Peter Barker at Friday, August 26, 2016 No comments: 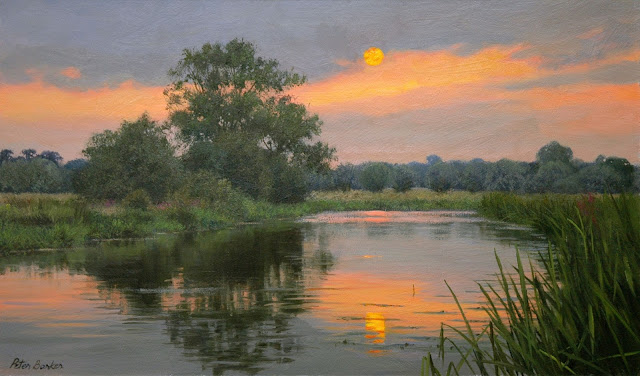 This fabulous view was just a few days ago whilst walking with Jane on the banks of the River Nene near Waternewton. The sun was an intense golden orange ball, a colour that is not possible to convey with paint. I used a blob (technical term) of impasto pure Cadmium Yellow for the sun itself, but it's frustratingly inadequate to describe the intensity of the setting firey star.

The painting is dangerously close to being twee, something I always try to avoid, but I just had to paint it!
Posted by Peter Barker at Wednesday, August 24, 2016 No comments: 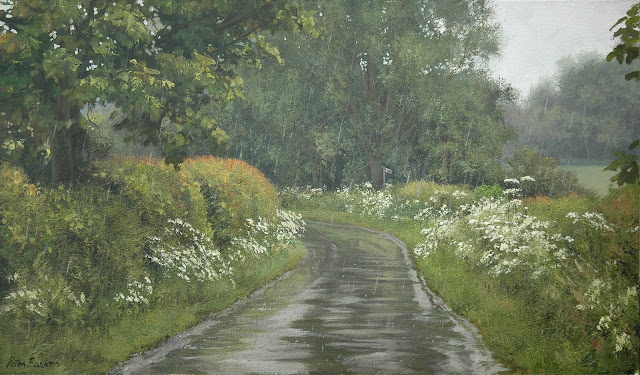 This is just finished, so it's very much a wet painting in more ways than one! The wet road had such beautiful patterns, I just had to paint it.

I paint a lot of rivers as you know if you're a regular visitor to my work, and the road was little different - just a question of observing the reflections in the road, with the drier bits of road punctuating the surface like wind-ruffled river.
Posted by Peter Barker at Sunday, August 14, 2016 No comments: 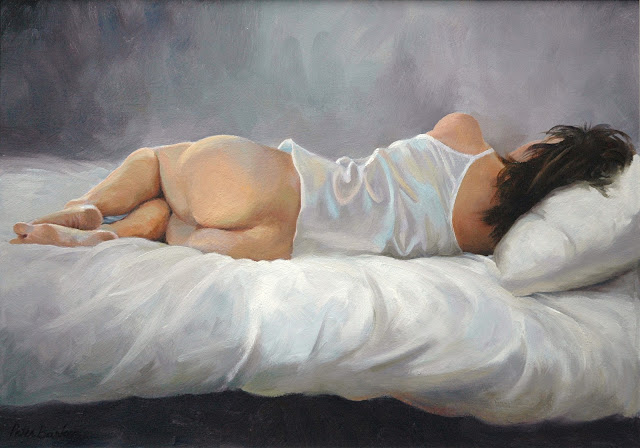 I've reworked this painting for the second time now, after re-assessing it. In its previous guise, the pillow and quilt were patterned, and on reflection, I felt it competed too much with the figure, so I've changed it to pure white, which I think looks far better and stops the competition!

The silk top was great fun to paint with all those shiny folds, and here is a perfect example painting what you see, not what you know, or think you see; if I asked what colour the top is, hopefully the vast majority of people would say white, but only the very top accents are pure white - the rest of it is a kaleidoscope of greys, purples, greens and yellows, taking great care to observe those subtle tone and colour changes in the folds.
Posted by Peter Barker at Friday, August 12, 2016 6 comments: 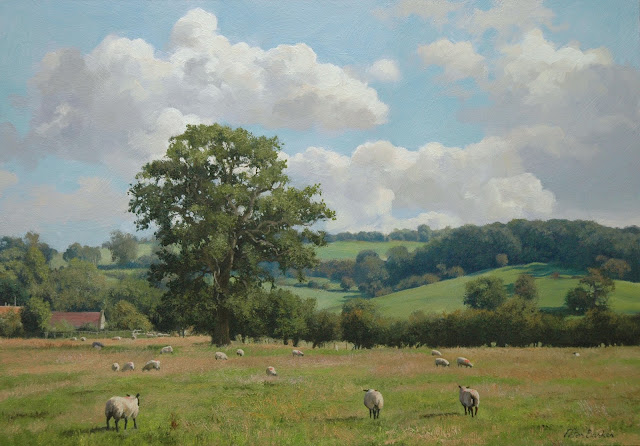 I have provisionally painted this one for the Royal Institute of Oil Painters annual exhibition, in the hope that something traditional might get accepted.

It's a view near Mickleton in the Cotswolds, my old stamping ground - I was an assistant professional golfer at Stratford-upon-Avon for 6 years in the early seventies, and originally hail from Banbury in Oxfordshire. I drove past this corner and looked to my left to see this beautiful, classically-shaped English Oak, with a backdrop of hills and woods, and a couple of barns, with lots of sheep in the field. It was a custom-made composition. 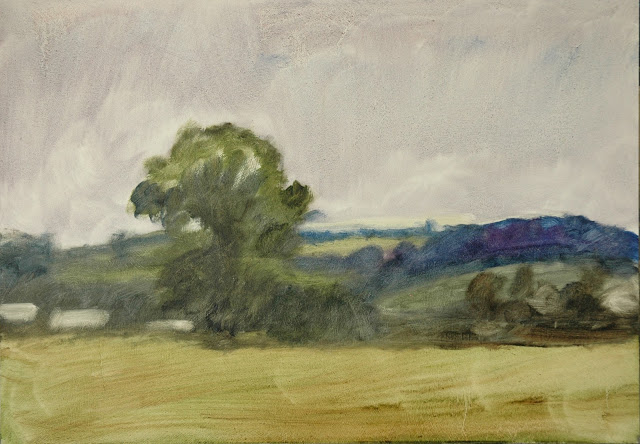 Here are the basic shapes scrubbed in with diluted, thin paint, with the rough tones... 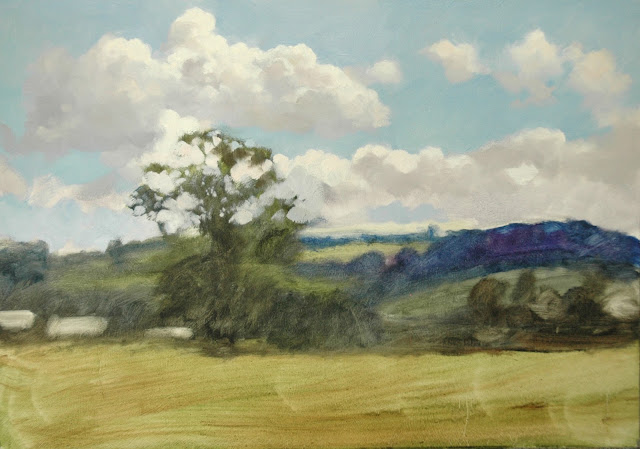 ...and here I've worked on the sky, before going back into the main tree and painting in the other main players. You can see that I placed the sheep, especially the three in the foreground, to direct the eye into the painting, towards the focal point itself.

You are welcome to attend for a small fee on the door, so if any of you can come, I look forward to seeing you!
Posted by Peter Barker at Friday, August 05, 2016 No comments: 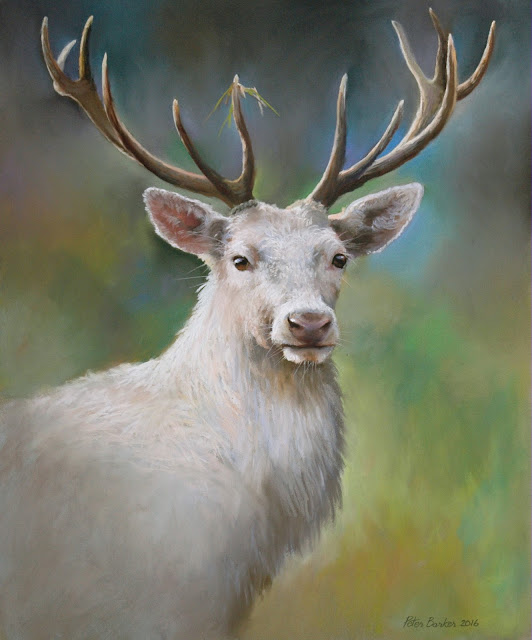 This one is a commissioned painting for the owner of a local pub - no prizes for guessing the name of the establishment!

I used a combination of photos of a normally-coloured stag for the pose and a white one for the colouring, with some artistic licence for the lighting. I also made his neck and chest 'feathers' a little broader to give him more presence and majesty. Although the stag is white, and you immediately know he's white, I used no white on the fur at all, and in fact the only tiny spot of white used was for the highlight on his right eye.

Backgrounds for animal head and shoulder studies are always tricky - you don't want the background to fight with the animal itself, and the one absolute no-no for me is to depict the animal with a straight-line cut-off at the neck, so that the portrait looks more like that of a severed head, rather than of the living, breathing animal, yet so many artists do just that, spoiling what is otherwise a very good painting. Fading out the bottom section of the stag avoids too many focal points and makes the eye concentrate on the head.

I like to use plenty of 'counterchange' on my portraits, using the highlights on the fur and antlers in this case, so that light passages are set against a darker background, and darker passages set against lighter background. This helps 'lift' the subject from the background, giving it a three-dimensional quality. You can see that I've done this all over the painting.
Below is a photo taken half-way through the painting, where I was plotting the rough colours and tones of the background. You can see that I changed the tone of the background just behind the stag's left cheek (our right), initially making it darker than the cheek, then changing it to a lighter tone and an almost lost edge. 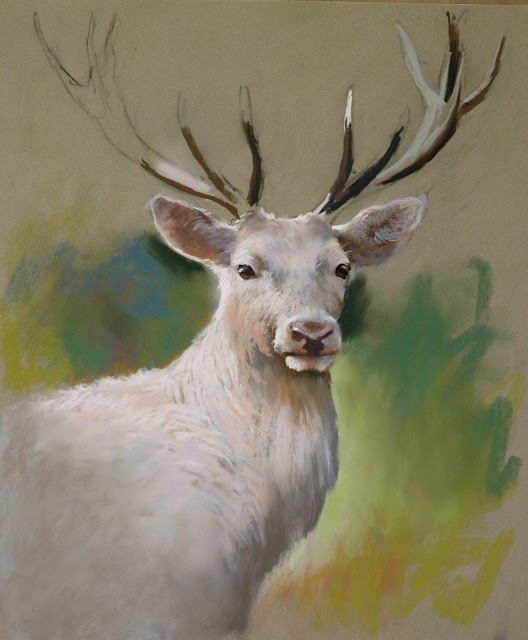 For an animal portrait, I would normally place the head high up in the picture plane, so that the eyes are well above centre - this gives the animal more importance, and prevents wasted space above the head. But here, with those great antlers, there was no choice but to place the head much lower, with the eyes only just above centre. This presented a problem of a lot of vacuous space to fill around the antlers. I could have made his antlers much smaller, but that would be like cutting off the horn of a Rhino, so I eventually opted for making the top of the background quite dark in order to push the eye of the viewer down to the main focal point, and I also put a flourish of a little grass on one of the tips for added interest in that section.
Posted by Peter Barker at Tuesday, August 02, 2016 No comments: